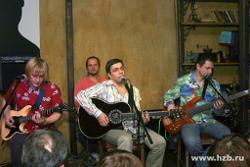 She takes the step, that’ll mean goodbye to home
She knows it’s time to make the break
She’s got a bag with a mirror, brush and comb
That’s all she really needs to take

Her heart just beats like it’s never done before
If someone stops her life, she’ll die
A little prayer as she tumbles with the door
She hopes her mom and dad won’t cry

“London’s not too far”
She’s heard the neighbour say

She’s so in love with a man she doesn’t know
She’s only seen him on T.V.
But love is strong and it’s calling her to go
To London where he’s sure to be

She looks outside; it’s a wet and windy night
It looks so very dark and cold
She thinks perhaps London’s not so very bright
Especially when you’re five years old